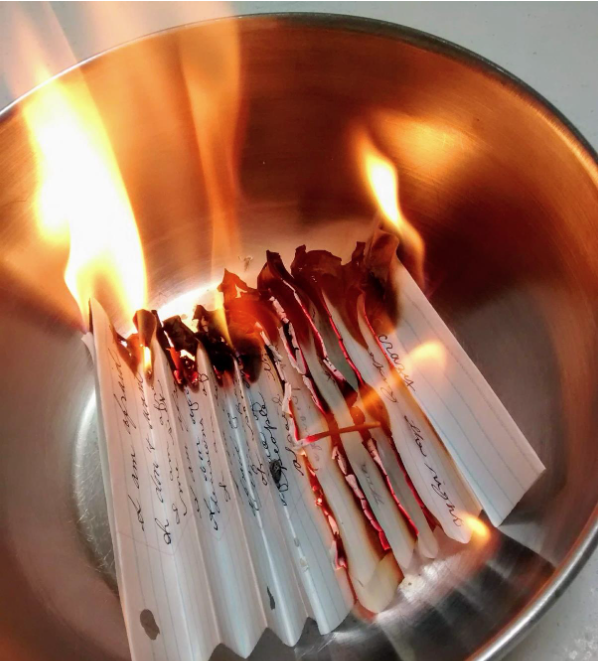 Cleaning Piece IV
Write down everything you fear in life.
Burn it.
Pour herbal oil with sweet scent on the ashes.

I enacted these instructions during a summer evening in 2019, at around 10:00 pm. Quickly, I wrote a list of fears on a notepad, folded the paper into an accordion and put it in a small metal bowl. I did not want to set off the smoke alarm so I grabbed a lighter and my homemade lavender spray and made my way over to the park next to my home. It was late enough in the day that the park was practically empty so I took the opportunity to choose a spot that felt right. My boyfriend came with me to witness the experience. I set the paper on fire, waited until it had finished burning, and sprayed it with lavender. My homemade lavender spray lifted the ashes and blew most of them away as I noticed the scented oil clash with the smell of smoke.

When making my list of fears for this experience, I noticed some resistance within myself. The action felt self-involved and I did not feel that I wanted to dwell on negative thoughts. Some of my fears felt profound while others felt silly and dramatic. I realized that I was judging these fears and viewed them as a measure of my inner strength. One of them almost made me cry, and if I think about it now, the feeling creeps back up.

While trying to find the right location in the darkness to burn my list of fears a number of thoughts came to mind. There was something about the act that felt ritualistic to me. The bowl that held the burning paper, the paper itself, the oil I used; in short, the elements involved in this act all felt elevated in importance. The act felt sacred, close to prayer. Even the fire took on a deeper meaning. Fire is often associated with annihilation or destruction, but I found myself thinking of it more as a symbol of purification and transformation. I recalled the law of conservation of mass first described by the chemist, Lavoisier, in the late 1800s. Following a set of experiments, he concluded that nothing is lost, nothing is created, but that everything is transformed (Sterner et al., 2011). Therefore, setting fire to this list of fears did not erase them but allowed them to be viewed differently through this creative act. Here I saw a link to Yoko Ono’s Cut Piece (1964), where the act of participants cutting away at her garment “transform[ed] acts of destruction into acts of creation” (Concannon, 2014, p.104).

In the summer of 2019, I visited a retrospective on Yoko Ono’s art at the Phi Centre. This centre is located on Saint-Pierre Street in Old Montreal and displays a diverse range of contemporary and multidisciplinary art. Like the instructions I followed initially, the retrospective contained pieces in which the viewer was encouraged to participate or interact. As a result, it is the viewers’ participation that allows the art piece to take shape, and at the same time allowing the viewers to alter or affect along the way. Through visiting the Phi Centre, I found that there were a few differences in how I followed the instruction score. I had a better understanding of the instruction score as an art form; therefore, I took my time and respected the process more: I chose a bigger piece of paper on which to write my fears in my prettiest handwriting. I repeated some of the fears I wrote previously but I added new ones. This time, I noticed my teeth clenching and my throat tightening as I wrote the fears down. I was more careful folding the paper, and I found a spot in my house which wouldn’t set off the smoke detector. I cut the paper in half to make it fit in the bowl, used a fancy matchbox, and took pictures to document the event. Unlike the previous experience, I was
more meticulous during my ceremony. I could see how naming and burning a list of fears can provide a sense of agency over them, and how adding the scented oil could be an act of compassion and reconciliation.

Yoko Ono’s work centres on the notion of peace and all that it entails (Concannon, 2014). She approaches the concept of inner peace as well as peace extending to the world around us. Although her work often focuses on the power of collective optimism, she also solicits “the full range of human emotion” (p.107) from the viewer.

I understood what this ‘full range’ was referring to when viewing Arising Testimonials (“Liberte Conquerante/Growing Freedom” exhibit at the Phi Centre, 2019), an ongoing project that collects women’s disclosures of violence committed against them. I learnt that a search for peace stems from acknowledging the reality of people’s lives; the reality that peace, for many of us, is not a given. Unfortunately, the subject of violence is a subject we as women know all too well. I was hesitant to read any of the testimonies because the imposition of my gaze felt almost voyeuristic. However, I wanted to know if I recognised any of the women. Seeing so many victims brought up feelings of revulsion, frustration, sadness, and disappointment. My interpretation of the piece is that it isolates the women on the wall as victims. I found this maddening because I found that there was nothing to counterbalance this perspective. On the other hand, I think my reaction is partly associated with the fact that the piece probably strikes a chord in most of us. Upon reflection, I see value in participating in Arising Testimonials; to feel a sense of solidarity and to take the opportunity to unburden oneself can be so cathartic for the mind, body, and soul as well. As art historian Kevin Concannon (2014) asserts, Ono’s work incorporates “honesty that recognizes reality even as it seeks to transform it” (p.107). Sometimes you cannot just think of the world positively, you also have to blatantly and openly expose the bleak parts of life in order for change to occur.