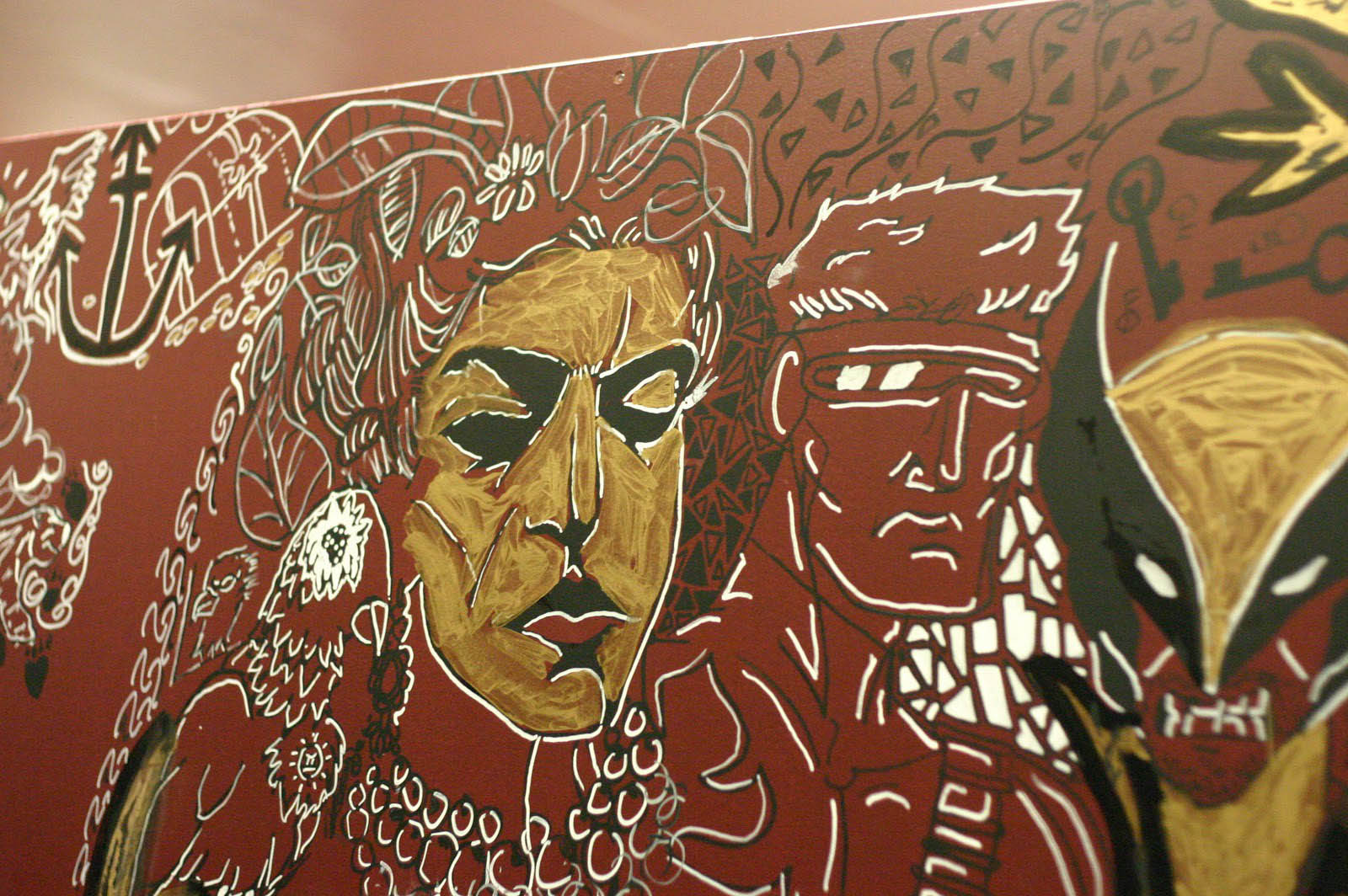 Since the autumn of 2013, I’ve had the unique opportunity to team up with the Under Pressure Festiva coordinator: Melissa Proietti, (M.Ed Educational Studies Concordia/current PhD student McGill) to help co-facilitate the Urban Arts After School Program at James Lyng High School located in Montreal’s Place St. Henri neighbourhood of the South-West borough. The program is part of a partnership between the YMCA and James Lyng’s CLC (Community Learning Centre), an extended dialogue formed between the school’s students and their surrounding community. Together, we offer the students a safe space and forum for discussion and the practice of urban visual arts, emphasizing the collaboration and communication process of the participants, rather than the end-product. Our diverse projects aim to create a safe and generative context within which collaborative art-making practice can put the youth and their ideas at the center of the process (Tobey & Jellinghaus, 2012, p. 128). This allows our students the opportunity to develop an awareness of their role as active participants in their school community and to ensure that all other school community members would be reminded of their presence and identity regardless of their status as compared to others (Proietti, 2010, p.70).

The 2013-2014 Urban Arts After School Program at James Lyng developed a narrative mural using meaningful and personal imagery chosen and developed by the group over a three month period. A dedicated group of twelve students ranging from grades seven through eleven, shared their collective stories. The students intertwined their individual voices through a collaborative mural on a locker wall, by filling in the negative space left by the title “Know The Ledge” with illustrations, paintings, and patterns. During a mentoring session with a visiting graphic artist, the students voted to use this quote as their inspiration.

School’s Stories The goal of community public artwork is to create a sense of ownership and pride in a place (Gude, 2000, p.11). According to post modern educator Olivia Gude, the effective community-based art mural cannot exist as truly an authentic narrative art piece unless the artists conceptualize, make the work and are also the audience (p.13). This article is the collective account of the experience of working together with a high school population to construct their locker room mural in Winter/Spring 2014, as well it reveals the stories and reflections on the process and creation from the students involved. I used Mary Jane Zander’s description of Peter London’s approach of “bearing witness” to help the selected students involved with the mural reconnect with the potential for meaning within their work (Zander, 2007 p.193). The “Know The Ledge” mural was a wonderful exercise in collaboration, as it displays a kaleidoscope of ideas and inspirations from more than the dozen students and staff. Everyone contributed to the design with their ideas to help reclaim a space in the school. Its accessibility lies in the simplicity of the mark-making, as well as the referencing of so many elements of visual culture from popular television programs, songs, films, and books.

The Design In lieu of starting on a typical indoor white wall, the students used a locker room wall that was already painted burgundy, the school color. Students created using white, black and gold paint markers, plus acrylic paint applied with brush, or aerosol can. The vast majority of the drawn and painted imagery found on the mural was selected and developed by the youth participants. The students had a thematic brainstorming drawing session in conjunction with a pattern-drawing activity with another visiting artist. In recent years, young people are being acknowledged as powerful resources: they are the makers, knowledge-creators, and teachers themselves, each with valuable ideas and capabilities to share with those around them (Curtis, 2008; Delgado, 2006). This is a factor Proietti and I emphasize, when facilitating the art workshops with our students. Their bountiful knowledge and creativity can be observed through their choice of imagery in the “Know The Ledge” mural. There are so many figures and forms to scan through, including familiar imagery that evoke memories of stories past and present.

We Come Together Tyrone, a veteran of the Urban Arts Program, no longer studies at James Lyng high school, but continues to come to the After School Urban Arts Program as an active participant and mentor to motivate his younger counterparts. When asked about the possible stories and meanings behind specific areas or imagery in the mural or his own particular contribution to it, Tyrone chose to instead address the mural holistically. He explains: “Just look at all the drawings and paintings. All done in many different styles, ranging in sizes, but yet they all come together and fit so beautifully. Since childhood, I never felt that I had to change my own individuality or conform. Like the school, the artwork accepts diversity and energy. We all just came together, and it works.”(personal communication, November, 2014) Tyrone held various formal leadership roles in his final year at James Lyng and embraced a very inclusive attitude towards everyone.

On Mentors Brian,* who now attends Dawson College in Montreal, was one of the first students of the group to begin to draw actual figures on the wall. He had joined us one afternoon with his own source imagery printed from the school’s library in hand, of what he considered a true embodiment of “knowledge.” He explains his process: “When we were discussing the ‘Know the Ledge” project, I thought of drawing some characters who are related to the archetype of the wise-old man like Merlin [the Wizard/Magician] from The Sword In the Stone or Ben Kenobi from Star Wars. The first character I decided to draw was the character Giles from “Buffy the Vampire Slayer” series because while the character fits in with the theme, he’s more relatable than the others I’ve mentioned. In the show, Giles acts as both the mentor and surrogate father to Buffy and her friends. What I find relatable about him is that while he and the others are close like a family, Giles doesn’t quite fit in with them socially. Giles proves himself useful to the team whenever trouble arises. When drawing him on the ‘Know the Ledge’ [mural], my favorite part of the process was trying to carefully capture his facial features (including wrinkles) as closely to his TV counterpart as possible.” (personal communication, November, 2014) Like the character Giles, Brian became an important resource of knowledge and expertise for his peers and friends when it came to collaborating on school-assigned video projects or collaborative art activities in his final year.

Art Heroes
Kevin, a grade 11 student, has a real passion for comic book art and had drawn many of his favorite cartoons and comic superheroes throughout the mural. I was delighted to learn that he had the strongest connection, not a fictional comic character, but to a real artist because her story resonated with him. She had overcome her own disability, to become one of the most recognizable artists of the 20th century. Kevin remarked, “I personally felt the strongest connection to the portrait I drew of Frida Kahlo. To me, she represents someone who succeeded in her art, and overcame her disability. I’m like that. I can relate to that.” (personal communication, October, 2014) Kahlo painted the events of her own life with symbolic elements and situations very much like this narrative mural, which contains the symbolic elements and stories of all those who were involved in creating it.

On Artistic Flow
Token was a recent transfer student and new addition to the James Lyng Urban Arts Club when we met in the winter. Initially perceived as shy and soft-spoken by his peers, Token was a steady participant to the mural creation. His miniscule drawings of characters and forms added a whimsical touch to the piece. It is safe to say, Token’s involvement with the ‘Know The Ledge’ mural helped lead to some extended opportunities to collaborate in greater-Montreal community artistic endeavors. Token has since been involved in a live tape art installation project at Breaking Curfew (a youth-driven arts party); the Oliver Herring hosted TASK Party at Concordia in June; and the 19th Annual Under Pressure Festival this past August. About his process, he commented, “The drawings and patterns I contributed to the mural were really random ideas that I thought up on the spot. I didn’t have any type of strict plan about how I wanted anything to look. I went with my thoughts in each moment and went with the flow, while knowing everything would turn out looking cool and interesting no matter what. I think the process in which I contributed some of my art to this project resembles me a lot as a person. I’m usually just going with the flow in life and I do many things in this life quite spontaneously and without having any specific guidelines.” (personal communication, November, 2014)

Hail to Haring:
Program veteran Shannon,* had been in the Urban Arts after school art program since it started four years ago. Another self-proclaimed shy student, her innate talent for illustration and design is something that will open up many opportunities for her in the future. She is currently studying Studio Arts at Dawson College and aspires to become an art therapist. As a veteran of the group, Shannon would often set the tone and ensure that her younger peers were comfortable or had ideas for drawings. She is responsible for a lot of the larger-scale imagery in the mural. She pays homage to an artist she admires and references in the mural. What resembles Keith Haring-inspired silhouette figures are found dancing amongst the patterns in various spots of the mural. Shannon discusses her intention, “I discovered Keith Haring this year and really enjoy his style. Although his art seems fairly simple it still fascinates me and I learned that his art was something very new at the time. He used it to make statements about the world and it spoke about death, war, sexuality, drugs, etc. His art was used as a strong voice for the community.” (personal communication, November, 2014) Keith Haring’s mass-appeal and accessibility has made him a favorite amongst street artist fans of all ages. He was an artist for the people and made it his mandate to be representative of a wider community than just the white-cube Fifth Avenue Gallery spaces in NYC. Haring’s contribution to the art of the 20th century is difficult to fully appreciate, because ultimately he transformed our idea of what art is. When once asked to state the values he was trying to impart in his work, Keith replied that he wished for “a more holistic and basic idea of wanting to incorporate [art] into every part of life, less as an egotistical exercise and more natural somehow. I don’t know how to exactly explain it. Taking it off the pedestal. I’m giving it back to the people, I guess. (Drenger, 1988, p. 53)”

Final Thoughts:
Like many of the urban/street artists who have influenced the culture, the Urban Arts After School Club plans and produces many public artistic interventions in and around the school for the entire student body to enjoy and participate in. Although not originally intended to be such an interactive piece, one can’t help but get lost in the intricacies of the Know the Ledge mural’s imagery. The mural was an opportunity for us all to share our stories and experiences amongst the group, as well as the school community-at-large. Our Visual Culture Art Education (VCAE) inspired approach to art education is successful with our given population as it places our students flush in the center of the creative process, “engaging them in opportunities to become critical thinkers and problem-solvers as well as artists and agents of change” (Tobey & Jellinghaus, 2012, p. 142). We look forward to planning further opportunities that allow our students to voice their stories within the context of their school community and surrounding environment; and allow for them to make informed decisions on their shared communal spaces.