Messages on the Wall
Lesson Plan

Last year, as Montreal and Canada celebrated milestone birthdays with big events and strong messaging, there was very little consideration of First Nations peoples. I decided to use my teaching practice to celebrate the longstanding and rich histories of Canada’s Indigenous peoples. Pictographs and petroglyphs are some of Turtle Island’s oldest art forms, predating colonization and the development of Montreal and Canada. Pictographs and petroglyphs are pictorial messages created by shamans as a means to connect with the spirit world, while also leaving traces of their culture and beliefs behind, to be discovered in often remote locations. Inspired by this rich artistic and cultural legacy, I worked with 70 students in grade 4 and 5 at École St-Léon-de-Westmount, asking them to consider a longer history of “messages on walls,” to reflect on their own relationship to the land, and to use these as starting points for personal expression and public engagement. Each student used a fold-able paper brick as their canvas, and these were assembled to create a collaborative wall that activates an important conversation between the past and the future, as well as encouraging reconciliation through art-making.

This 2.5 hour art activity was originally created for elementary school learners in grade 4 and 5 for the 2017 McEntyre Project. It could also be modified so as to be taught to learners from grade 6-grade 9.

This art activity introduced the learners at École St-Léon-de-Westmount to the history and significance of pictographs and petroglyphs on the landscape in Canada. I offered learners a provisional definition of the word “shaman” and gave a sense of how and why they created these images. Subsequently, I showed contemporary examples of graffiti in Montreal and asked students to think about how this form of public art can promote a positive message, social justice and equity. Students then identified ways to represent nature and care for the environment, and these ideas were used as a catalyst in the production of the imagery for their bricks. Students were discouraged from mimicking the petroglyphs or the graffiti; rather, they were encouraged to invent their own imagery, based on their lived experience.

Students learned a painting technique that would enable them to create the look of a brick, using acrylic paint that was applied on paper with a sponge. Afterwards, they were encouraged to create and develop their images, using multiple colors of Sharpie markers over the acrylic paint. Once the bricks were finished, they were transported to Victoria Hall and assembled into a wall-like installation for exhibition.

-Scissors (can be used by students)

-Exacto knife (to be used by the art educator)

-Paint trays (like reused styrofoam plates from the grocery store)

-HB Pencils and some coloring pencils

For this project, the bricks were made to the same scale as a regular-sized brick, which is 3-5/8″ x 2-1/4″ x 8.” I designed a template that would be used to measure and cut a paper brick for each student. The template contains a bit of overhang material that is suitable for gluing and needs to be creased using a bone folder. The template is laid upon an edge of a Bristol paper and you use it to trace the outline, in addition to marking the lines where the creases will be made. Although this required some preparatory work, it made for a substantially smoother lesson later on. Once the bricks were prepared, learners could easily produce their work, and then be able to fold and glue it to make their final piece, in a way that they wouldn’t damage it. Whatever leftover paper from the cutting was used for other projects.

I presented a slideshow to students, which took approximately 30 minutes and presented several key aspects of the historical, cultural and artistic material before they embarked on their painting and drawing. I introduced the slideshow by establishing the theme of the McEntyre Project, which was “Secret Places, Hidden Treasures.” We proceeded to look at an example of the Mazinaw Rock pictographs made by Anishinaabe shamans and elders at Bon Echo Provincial Park (that I had photographed while visiting the site in 2014). I also showed other Anishinaabe rock art examples from Agawa Rock (Lake Superior) and Fairy Point (Lake Missinaibi). I explained how pictographs were created by applying red ochre and other pigments to rocks, using the finger or a brush, and how petroglyphs, while similar in imagery, were created by abrading the rock face using stone tools. Students were invited to try to identify the shapes in the images and to speculate as to why First Nations peoples created these.

As a non-Indigenous person, I offered only a preliminary glimpse of the role of the shaman in First Nations cultures and the relationship between the images–which depicted animals, people, mythological creatures and other cultural referents–and the places that they were made in, which were often remote and hard to reach. Seen hundreds of years later, these images are like messages on walls, left for future generations to see and appreciate. Today, they may offer a starting point for young artists in thinking about our relationship to the land and to reconciliation.

Continuing the slideshow, we segued into graffiti and public art murals, so as to establish a contemporary connection to the idea of Messages on the Wall. Graffiti murals are a bold, expressive and highly popular public artform occurring on brick and other types of walls and surfaces around Montreal. The murals, aside from featuring aesthetically pleasing and elaborate imagery, have the ability to convey an important message in a public place about an important issue. I showed examples of murals by Curiot and ASHOP and encouraged learners to think about how these could impart a positive message about respecting and caring for the environment. I asked the students to think about their own experiences of these themes and offered an assortment of visuals that they could use as a source of inspiration if they had trouble coming up with their own imagery, such as line drawings of animals, visuals of landscapes, and symbols of care for the environment or positive engagement with nature. This was another opportunity to discuss the integrity of the art we had looked at, as well as the significance of students coming up with their own imagery. I invited students to make begin making sketches of some of their ideas on paper, as a preparation for later on.

We continued by covering their bricks with acrylic paint, using sponges to apply the medium in order to give it the desired look. There were 6 work tables, and each table had one of the three colors–yellow ochre, raw umber and burnt sienna–on a styrofoam tray. Some students chose one colour, while others played with two or three colours to give their brick a “random” kind of look. The paint was applied in layers, allowing each layer to dry before the next application. Once finished, these were left to dry until the next session.

During the following period, I offered students pencils to quickly sketch out their drawings before they produced finished drawings using the Sharpie markers. For those who were working on a darker colored brick, they were offered a coloring pencil, which made a more visible line than the HB pencil on top of the acrylic. Students had approximately 1 hour to make their drawings. They were invited to use text in their drawings, so as to emphasize the theme. They were encouraged to draw on two of the four panels -what would end up being the front and the back of the brick- because once the bricks were stacked, the viewer would not be able to see all the sides of the work. The art teacher and myself walked around, offering encouragement, tips and ideas for their creations.

Finally, as the students were finishing their work, they were reminded that the bricks would be individually assembled and that all of these would come together as a modular installation to create a wall. The students would be able to experience collaborative nature of the project and the installation, and discuss the art-making process and ideas behind it with their parents and peers once the exhibition at Victoria Hall was open for the public.

After completion, the works were transported to the exhibition hall and assembled using hot glue. Because they were creased beforehand, it was relatively fast to assemble them. We created an installation with the bricks so as to produce a free-standing wall that you could walk around. In this way, you could see the hand-drawn parts on the front and back of each brick, and experience all the works as a whole. 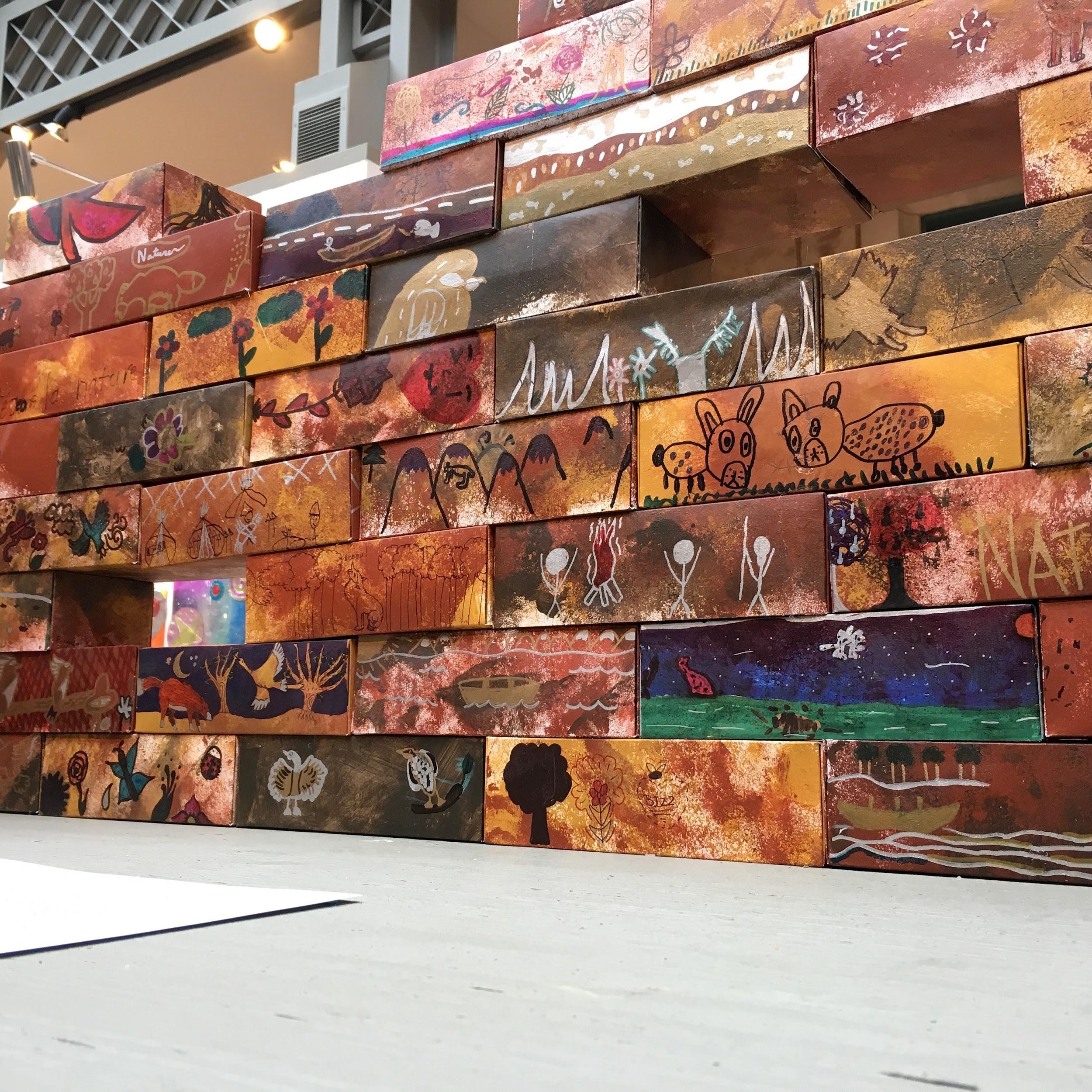 Pictographs and Petroglyphs. (n.d.) In The Canadian Encyclopedia. Retrieved from