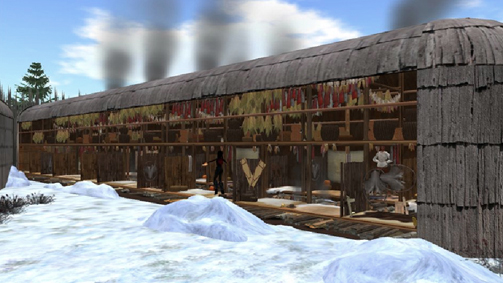 Video Games as Teaching Tools: TimeTraveller™ and the Exploration of Aboriginal Education

To present TimeTraveller™ and Second Life as educational tools in the classroom provides the opportunity for educators to not only make Aboriginal history accessible, but also to create a space for learners to explore personal history through new media.

Skawennati Fragnito: Artist as educator
Art education creates a space for learners to unravel the fabrics of identity, revealing truth and reality behind the definitions of culture. In the intimate moments created with art, learners have the opportunity to deconstruct stereotypes and reconstruct a more honest sense of self. Skawennati Fragnito, a Mohawk artist from Quebec, works as an agent for this reconstruction process for the Aboriginal people through her establishment of historically-inspired web pages and machinima creations. Her ongoing 2009 project, TimeTraveller™, provides a framework for traditional storytelling of historical events and Aboriginal perspectives. In my research and experience, this video game-inspired series serves two functions in contemporary art education: to retell history from a new perspective and to motivate learners to move into a future free from the shackles of ethnic specificity.

By revisiting history and questioning its effect on the present, TimeTraveller™ helps to deconstruct the numerous representations of Aboriginal history. Skawennati formats this machinima – a hybrid of “machine” and “cinema” that uses real-time animation to manipulate a videogame engine and assets, into a framework that both educates and entertains learners with the experiences of Aboriginal people (2012, Machinima). She creates a virtual universe in the Second Life platform (a modifiable video game environment) in which the main character, Hunter—a Mohawk warrior from the future—travels into the past to learn about important events in Aboriginal history (Leborgne, 2010, p. 13). These events help Hunter to better understand his relationship between heritage, society, and self.

The question of defining “Aboriginal” and establishing how it affects the perception of self is common in Native communities—I say this since I myself come from one. Although Hunter’s life is part of a fantasy, his experience is relatable and genuine for many people. According to Fragnito, TimeTraveller™ as a web-based project, creates a space in which aboriginal people “shape [their] own representations [of self as well as] make them known” (Fragnito & Jason, 2005, p. 29). In this respect, Fragnito’s project allows the viewer to experience a familiar situation, reflect upon it, and make their own parallels to it; they can follow Hunter on his journey to contest stereotypes and discover truth. As art historian and anthropologist Charlotte Townsend-Gault states in her article “Kinds of Knowing,” Aboriginal artists need to “find ways to translate, transform, re-invent, protect, and obscure knowledge specific to Native people” (1992, p. 76). Fragnito’s project not only incorporates the cultural knowledge and history of Aboriginal people, but she renders it into a language accessible to a larger audience.

Video games: A question of accessibility
Viewers are able to vicariously experience Hunter’s discoveries, emotions, and changes in perspectives through Skawennati’s choice in technology. Through the familiarity of the technology (the video game) and the intimacy of the narrative, viewers are able to project themselves into Hunter’s life and follow him on his emotional quests. As theorist of transnational art education, Julia Yujie Li proposes, “students’ experiences and backgrounds should be valued and integrated into classroom learning and teaching” (2007, p.3). The video game style in this regard provides a unique experience for viewers, who are able to bring together the nostalgia of childhood with a new set of stories and perspectives. The use of video game media as a result helps to translate Aboriginal history into an accessible contemporary visual language.

In his article, “After Authenticity: A Post-Mortem on the Racialized Indian Body,” curator and art historian Richard Hill argues that Aboriginal artists need to “participate in whatever modern dialogues are pertinent [to maintaining] the tradition” (2009, p.103). In this respect, Hill suggests that Fragnito’s use of new media carries the traditional values and histories of Native people by contemporizing the mode of storytelling.

Investigative research: Cross-curricular education
In November 2011, I began to research the TimeTraveller™ project as an Independent study for the Art Education Specialization. In my proposal, I suggested to work closely with Skawennati in Concordia University’s OBX labs (Laboratory for Experimental Media) to both learn how the project works from the perspective of an artist and art educator. Through this study, my goal was to gain experience with the Second Life platform and Skawennati’s research methods in order to present TimeTraveller™ as a tool for art education. I envisioned the project to be used an instrument for teaching Aboriginal histories within North America, and Second Life as a space for exploring the possibilities of student-inspired machinimas.

The first stage of this research project was to investigate the relationship between heritage and identity. Understanding this relationship was important to understand my role as an Aboriginal artist, educator, and researcher. By researching the historical events that built episode five of the TimeTraveller™ project, I connected to parts of history that defined my Aboriginal heritage and identity.

These historical events would be used to support and enliven the personal narratives of the characters. As I sifted through textbooks, newspaper clippings, and personal interviews with family members, the research potential for students became evident. The personal framework of the machinima acted as an incentive to obtain accurate history to blend into a credible narrative.

My second responsibility involved the application of the research into construction of the Second Life® machinima. The period-specific objects, wardrobes, and accessories revealed in the research were transformed into in-world creations using three-dimensional modeling tools found in the Second Life system. To build objects, clothing and accessories, I used in-world models (geometrical shapes), prims (units of measurement) and textures (layers of color and images) as the base layers for characters, settings, and other detailed items. For more difficult items, I was responsible for purchasing pre-made clothing, hairstyles, and props as well as skins, and body shapes in Second Life®’s Market Place. These two aspects of creation, building and buying, provided a space to learn about budgeting, technology, proportion, texture, color, and composition.

The second stage involved the integration of my creations into the set (environment) and plot of episode five. I was required to place the objects into the set created by other builders, and to dress the character avatars with clothing and props. Following was the acquiring of specific animations to move and operate the characters for the film stage of production. To create an animated scene, the builders were required to physically act out the motions presented in the script, document the ‘movement’, and match the animation in Second Life’s Market Place. Through this process, I realized the usefulness of Second Life as a tool to understand time, sequence, story boarding, and acting.

Potentials for Art Education
To present TimeTraveller™ (2009) and Second Life® as educational tools in the classroom provides the opportunity for educators to not only make Aboriginal history accessible, but also to create a space for learners to explore personal history through new media. The episodes of TimeTraveller™ can be used as starting points to discuss Aboriginal stereotypes and history; they can provide the opportunity to connect the events of the episodes to art history and literature to enhance Aboriginal Education. The project can also introduce students to Second Life as a tool for expression, research, and the development of a variety of skills. The steps involved in the creation of a Second Life machinima will require students to combine language arts, mathematics, history, theatre, visual arts and economics into one unit.

In a draft unit plan, students will have the opportunity to look into language arts to create storylines, settings, and characters. The creation of the storyline will involve learning story arcs, genres, and formulas for creative writing. The settings produced in these narratives will connect learners to their history classes to research events and places relevant to specific time periods. The character design will similarly involve learning character profiles and stereotypes in literature as well as employing the imagination of students.

Mathematics and visual arts will come together in terms of building sets, characters, and props. Students will need to know area, proportion and texture to create a believable space. For items that are too difficult to create, students will be required to purchase items from the Market Place. This responsibility will allow students to exercise their knowledge in budgeting and economics. Finally, theatre and visual arts are combined in the final production stage, requiring students to sequence, act, and compose their frames into a well-constructed narrative.

Conclusions
The ideals Skawennati Fragnito presents through TimeTraveller™ can help learners to reflect, identify and reconstruct the perception of Indigenous people. The events presented in Skawennati’s episodes can be broken down in the draft unit plan through discussion, reflective writing and visual response and later connected to the timeline of world history. Li (2007) argues that the “processes of making and critiquing visual culture provide tools and opportunities for transformative thinking and action” that sustain the democracy of a community (p. 2). This process can thus provide the opportunity to learn about other cultures, inspiring educators to use other forms of new media art to motivate the technology-based learners of the twenty-first century.

The motivating aspect of the TimeTraveller™ project is its visual presentation of a video game machinima. The familiar visual culture of video games and story formulas can enhance the experience of history and provide a safe space for learners to question the relationship between heritage and identity—which in my case it did. The framework of the TimeTraveller™ project also presents the opportunity for learners to use the Second Life system as a tool for accessing and presenting history. Although I lacked the animation and modeling background, the Second Life system provided user-friendly tools that were grasped over the period of two weeks. The processes involved in creating these machinima artworks employed cross-curricular learning and personal involvement, enriching the relationship to research and learning. The education students will be obtaining through inspiration of this machinima series will move Aboriginal education from learning about the fur trade and totem poles to a variety of artworks and events that contribute to North American culture.