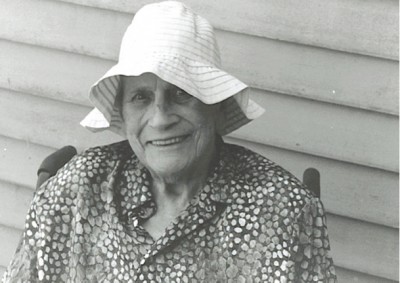 What Photography Can Also Be

The image here is the last photograph I took of my grandmother who was suffering from Alzheimer’s disease. I took this photograph after convincing Katheryn to come outside on a bright and sunny day on the south shore of Nova Scotia.

Like any other medium, photography is a tool for expression. Through its lens, the artist makes choices of what she or he sees, which reflects a world view. The dissemination of photographic work, whether print or web-based, stimulates a visual reaction – to me the most intriguing aspect of this art form. I admire photography that creates and questions content and offers the possibility of interpreting many narratives, links, or themes. In this essay, I will discuss how I believe photography can be used to re-experience, recall or re-frame a memory for individuals with Alzheimer’s disease as a means for improving their quality of life. This specific research draws inspiration from my artisitc practice, experience as an art educator, interest in psychology and personal connection to my grandmother’s battle with Alzheimer’s disease.

In support of my short inquiry into an in depth subject, I will discuss the work of Dr. Cathy Greenblat, a sociologist who since 2001 has been working on a multi-faceted, cross-cultural visual sociology project on care for the dependent elderly, focusing primarily on Alzheimer’s disease care (Greenblat, 2001). I will also discuss an article on digital storytelling by Chloë Brushwood Rose, an Assistant Professor in the Faculty of Education at York University, and founder of Participating Artist Press Agency (P.A.P.A), an internationally curated network of artist-correspondents founded by Dutch artist and art educator Lino Helling. The purpose for this inquiry is to investigate positive outcomes from the above-mentioned examples, and the feasibility to initiate a similar project in Canada.

I would like to begin this discussion by introducing a woman who has had an immense influence on me and who inspired my idea of developing a project based on photographic sensory imagery experience, my late grandmother Katheryn Armstrong. The image here is the last photograph I took of my grandmother who was suffering from Alzheimer’s disease. I took this photograph after convincing Katheryn to come outside on a bright and sunny day on the south shore of Nova Scotia. During her struggle with Alzheimer’s, I witnessed Katheryn’s frustrations with memory first hand. Unfortunately it was after her passing that I was exposed to further research and opportunities regarding Alzheimer’s disease, memory, and the potential of the photographic image to aid in a higher quality of life. The central idea of the proposed project is that presenting nostalgic imagery in the form of still and moving images from an individual’s lifetime will stimulate the senses and memory, hopefully providing at least temporary relief from the frustrations that come with memory loss. This inquiry is only in the very early stages of development and I am aware that its ethical, theoretical, and practical aspects need much consideration. However, I believe its potential is worth presuing.

I envision this project taking place in a secure environment such as a nursing home, hospital or private health care clinic. There, I could eliminate any alternatively motivated influence when producing such an experience for this vulnerable population. I would also work in collaboration with skilled professionals in the field, such as medical reseachers, psychologists, and nurses, as well as the patient’s loved ones. Loved ones would not only collaborate in selecting and providing the most approporiate assemblage of imagery, but also in creating an environment based on security and trust.

If I had the opportunity to develop this proposed project, I would begin my research and take inspiration from the work of Dr. Cathy Greenblat, using photography to document the lives of people with Alzheimer’s. She has chosen to take descriptive photographs to portray aspects of their lives as they live with this generative disease. Her photographs and writing are intended to break sterotypes and spread awareness of the possibilities still available to people with the disease. Greenblat describes this well in her artist statement on her website:

To promote her message to a large public, Greenblat has published an illustrated book entitled Alive with Alzheimer’s (2004) and maintains an online portfolio which describes the work she has done in several different countries. Importantly, her photographs highlight the capabilities and the spirit of the individuals she is working with. Although eradicating the stigma and social assumptions regarding Alzheimer’s are absolutely imperative, I would like to orient my research in a more patient-centered direction rather than from a spectator perspective. Instead of “merely recording” to paraphase author Antonia Bardis (2004, p.2), I would use the flexibility offered by new technologies, choosing to upset the boundaries between the visible and the invisible, creating and simulating with the assemblage of photographic raw material to create what I hope will be a meaningful experience for the patient. I believe that the purpose of Greenblat’s work and my proposed project is similar: to improve the lives of those living with Alzheimer’s. While Greenblat’s approach is through social means, I would explore the potential to create a sense of identity through a sensory experience as a type of cognitive process.

I feel in some regards this sense of identity is what Chloë Brushwood Rose speaks about in her article The (Im)possibilities of Self-Representation: Exploring the limits of storytelling in the digital stories of women and girls (2009), describing her process as follows:

This type of process would be closer to what I envision in creating a sensory experience for the individuals with Alzheimer’s. It would be more of a collaborative process with their loved ones when selecting material and then working with the facilitator in order to derive the final expression.

The process Rose describes “reveal the possibilities and impossibilities of self-representation” (p.2). This identity, or self-representation is where the link between Greenblat, Rose and the sensory experience meet. Memory is a frustration with those suffering from Alzheimer’s, therefore so is personal and collective identity. I believe that the increasingly available techologies can allow for further creative inquiry.

Perhaps in the near future, research on the potential of technological arts will be incorporated in their mandate. As previously mentioned, I am only in the preliminary phase of exploration; however, it is encouraging to identify opportunities and seek out possible collaborators.

One example of someone undertaking such work is the Dutch artist and art educator Lino Hellings. I had the opportunity to meet this incredible individual at an international residency conference held here in Montreal organized by the Regroupement des Centres d’Artisites Autogérés du Québec (RCAAQ), who describe their organisation as “meeting point of a network of some sixty artist-run centers and cultural organizations from all over the province of Quebec” (RCAAQ, 2009). The RCAAQ coordinated the conference for ResArtis, an international organization providing a “worldwide network of artist residencies” (ResArtis,n.d.). Hellings was a speaker in a panel discussion on “Future Residencies”. She spoke about a sustainable residency project she created which in essence functions as a kind of “time machine” in a nursing home for individuals with Alzheimer’s. The time machine consisted of a multi-disciplinary collective memory for Alzheimer’s victims based in audio-visual material of collective historical events from their lifetime. These materials aim to encourage Alzheimer’s patients to relive and recreate aspects of memory. I believe Hellings’ philosophy of art education is integral to the “Time Machine” work she has conducted:

Inherent in Hellings’ philosophy is the importance of integrating cultural, political, social issues specific to a particular site and population. The interdisciplinary approach is also crucial. Similarly to Hellings project involving individuals with Alzheimer’s in nursing homes, she collaborates with with other professionals in the Participating Artist Press Agency (P.A.P.A.), an internationally curated network of artist-correspondents. Stated on P.A.P.A. website:

Hellings has received a combination of private and public funding from foundations in the Netherlands that conduct reseach on Alzeheimer’s. This funding will sustain the project for 25 years.

Perhaps in the near future, research on the potential of technologial arts will be incorporated in their mandate. As previously mentioned, I am only in the preliminary phases of exploration; however, it is encouraging to identify funding opportunities and seek out possible collaborators. These are the first steps for discovering more information on how initiating and implementing large scale projects could be possible within my professional abilities and interests.
Although such a project could become a spectacular opportunity, I cannot ignore the possible dangers of working with photography and memory with a vulnerable population. To potentially influence vulnerable individuals’ memories and so sense of self raises enormous ethical considerations. Sensitive and crucial issues need to be addressed when developing a project of this nature, not least the way that photographic documents tend to be considered as representing the ‘truth’ of a situation. Bardis further describes this issue in relation to photography:

The complexity of a project similar to P.A.P.A. is that the benefit of using photography simlaneously its greatest danger: photography-based memories can supplant personal memories. However, I believe that with the appropriate development and monitoring, the positive benefits would out weigh the potential negatives. I also believe the nourishment of nostalgic sensory experience could significantly improve the present. Using a collection of personal imagery from the individual, produced by the facilitator and loved ones of the patient would, I hope, cultivate a sense of self identity for the victim suffering from the memory loss. Imagery could include family photographs, historically significant events and important moments in their life. Video could also be included such as nostalgic commercials, television programming, older films, home videos, excetera. Sound can be incorporated, such as favorite songs, audio clips of loved ones, music, or comforting sounds. The sensory has the potential to even expand to other senses, such as smell. The imperative aspect is that the sensory experience is tailored to the specific individual.

To conclude, I believe my project has great potential that I would like to explore further. The inspiration and purpose for the cause is deeply felt, based on my experience of my grandmother’s struggle with the disease. My current studies in Art Education and Psychology and future pursuit of graduate studies in Art Therapy influence the type of projects I want to pursue as an artist/art educator. Art facilitation is just as enjoyable for me as creating artwork. To see, hear and experience the joy of collaborating on projects which benefit others is, for me, a gratifying artisitc means which I intend to pursue in my work. I see what photography can also be.